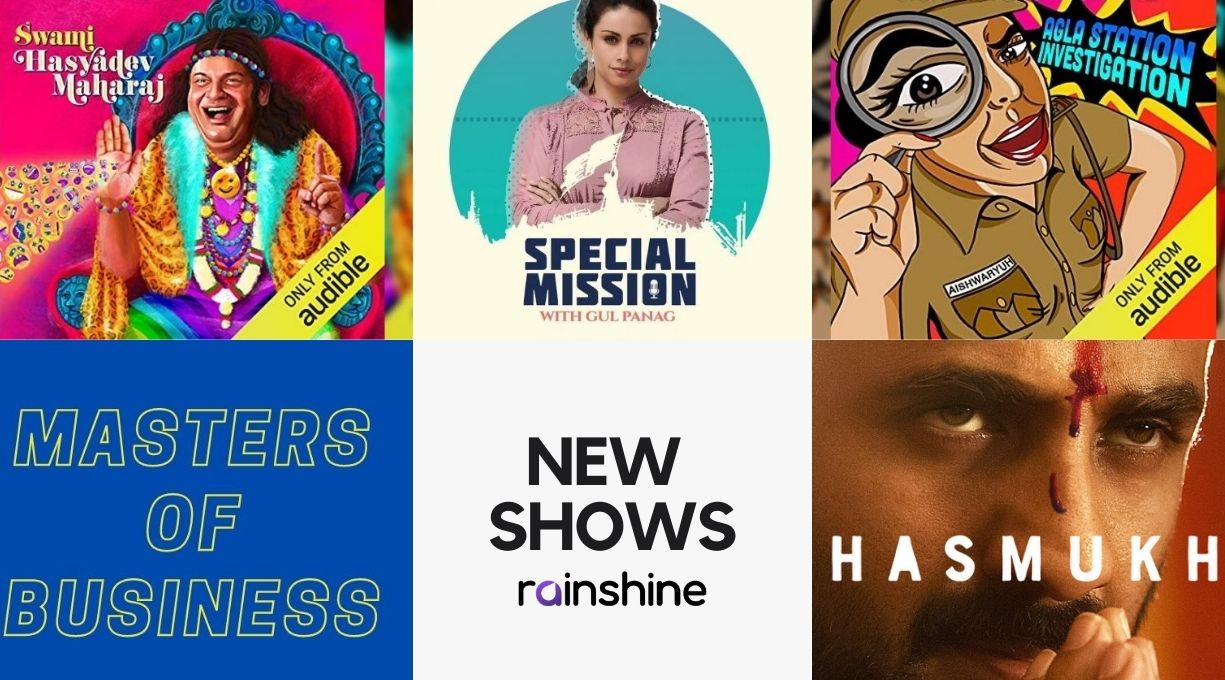 At a time when the majority of the world population is filled with uncertainty and is hitting the pause button on their daily routine, consumers have turned to stories to deal with the new normal. Rainshine Entertainment, a leading entertainment company that creates, nurtures and develops content studios that create fabulous content for Indian and global audiences, has conceptualized and produced some of the most inspiring, heart-warming, and thrilling content that has caught the imagination of Indians currently.


The slate includes Vir Das' critically acclaimed, dark comedy, Hasmukh, streaming exclusively on Netflix. The show has had a dream run since its launch, picking up the No-1 spot on India Top 10 in just a day from its launch on the platform. Hasmukh, a Weirdass Comedy concept, has been Directed by Nikhil Gonsalves and co-created by Vir Das & Nikkhil Advani.


Joining this power list is the Spotify Original Podcast, Special Mission, Rainshine Entertainment's heartfelt tribute to the Indian Armed Forces narrated by Gul Panag and created & story curated by Saishree Ashwin. Covering unheard stories around diverse topics like international rescue missions, stories of regimental legends, of love, of honor and even the animals that serve in the forces, the podcast features real-life stories of the Indian Armed Forces that go beyond valour, traversing the extraordinary, behind-the-scene lives of these heroes and their families. With two episodes already out, the show has been lauded for its depth, character, and ability to tug at the heartstrings of all those who listen in. The show has been produced by Rainshine Entertainment and ATS Studio.


Last but not least are three Audible Suno original podcasts - Masters of Business, where some of India's most prominent corporate leaders and entrepreneurs like Harsh Mariwala, Ronnie Screwvala, Kiran Mazumdar-Shaw, Umang Bedi, Deep Kalra, among others, hold audio masterclasses. It has been produced by CM Studios and co-created by Russell Pinto, Upasna Mann and Nudrat Khan.  Agla Station Investigation, a light-hearted, humorous account of the Indian Petty Crimes Branch (IPCB), an obscure branch within the police dedicated to solving only the silliest of crimes, and Swami Hasyadev Maharaj, the story of a fictional self-styled Godman who believes he was sent to earth to spread laughter, have both been created and produced by Weirdass Comedy.


Speaking on this occasion, Neeraj Bhargava, Chairman & Chief Executive Officer, Rainshine Entertainment, says, "We are amidst an extraordinary situation that calls for the utmost levels of patience and strength. During these trying times, art, in its diverse forms, is known to be a welcome distraction and comforter for so many people across the world. With everybody at home, content consumption as a whole has increased manifold because all of us are turning to stories to feel better."


Expanding further, Neeraj Bhargava says, "At Rainshine Entertainment, we are ensuring that we continue to offer high quality, engaging content, across formats and genres. Through these releases, we've curated compelling narratives which are resonating with our audiences and we are delighted with the feedback. There's something for everyone and I hope these stories will help our audiences get through this long phase of social isolation."


The owned and partner studios of Rainshine Entertainment are behind the creation, conceptualization, and production of these shows.

Created by and starring Vir Das, Hasmukh is a dark comedy that follows the journey of a timid, young man from Saharanpur who sets out to be the greatest comedian in the world. However, while he is a great writer, he lacks comic timing. Determined to do anything to achieve his dream, his untamed ambition sets him on a murky path when he realizes committing murder is the only way to keep his onstage mojo. The series can be viewed here.

Produced by Rainshine Entertainment and ATS Studio, the Spotify Original Podcast, Special Mission, is a heart-warming podcast series on the Indian Armed Forces. It is a collection of twelve real-life stories that go beyond the bravery and courage these soldiers are known for. Each tale speaks of love, of legends, of adventure, and of extraordinary lives that are unimaginable. But, more than anything else, these are human stories of emotions that touch lives in many ways. Covering a diverse range of topics like international rescue missions, stories of regimental legends, music and even the animals that serve in the forces, the series is currently streaming exclusively on Spotify. The first two episodes, 'Two Men and a Boat' and 'Of Love and Longing' can be accessed here.

Produced by CM Studios, one of the content production arms of Rainshine Entertainment, Masters of Business is a 21 episode series on Audible Suno that provides a free masterclass with India's most successful entrepreneurs and corporate leaders. Amidst the current scenario sweeping the world, Masters of Business serves as a high-profile online classroom with insightful and engaging lessons from industry greats like Harsh Mariwala, Ronnie Screwvala, Kiran Mazumdar-Shaw, Umang Bedi, Deep Kalra, among others. Whether it's learning how to create a business plan, launching your own company, expanding your team, or scaling your profit and growth, each episode is carefully curated with valuable lessons to help develop and strengthen business acumen. All the episodes are out on Audible Suno and can be accessed from here.

Agla Station Investigation is a light-hearted, humorous account of the Indian Petty Crimes Branch (IPCB), an obscure branch within the Mumbai police dedicated to solving only the silliest of crimes. Produced by Vir Das' Weirdass Comedy, the foremost comedy content studio and consultancy in India, the series follows the unusual characters as they solve crime after crime. Whether it's a case of mysteriously beheaded Barbies or even a bodybuilding champ's missing protein shake, no job is too small for them and no theory too wild. All episodes are streaming on Audible Suno.

Swami Hasyadev Maharaj, also from the Weirdass Comedy stable, is a 15-part satire fiction series featuring Suresh Menon. It tells the story of a godman who claims to be the inventor of every popular joke we now take for granted, from 'Haathi-Cheeti' to  'Door Se Dekha Toh..'. With the help of his 3 lifelong disciples, he travels across the world to bring a smile on people's faces. While some say he's a fraud, others revere him and his gospel of jokes (known as Hasyaveds). The show can be accessed on Audible Suno.